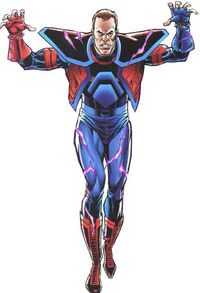 Base Of Operations
Justice Avengers Mansion, his own apartment in Manhattan.
Status

Before the universe was created, there was a clash between two near-omnipotent entities, the Brothers. Eventually, they settled their differences by merging into one being, and the current universe was created. The entity that would be known as Access was created to maintain the balance within this universe. From time to time, it is born in human form, until his powers manifest and it takes upon its mission once more.

The current Access is Axel Asher, of New York City. He believed himself to be just a normal 18-year old, just graduated from high school and having entered college. The only remarkable events in his life had been playing football in high school and romancing Ming, a member of a wealthy Chinese American family (though he's also attracted to another student, Caitlin Fitzgerald.)

However, during the Joker riots, his powers suddenly manifested. Incorrectly assuming that he was a mutant, and inspired by Spider-Man, he created the costumed identity of Access and became a superhero. He soon found himself working with the other resident heroes and joining their team, the Justice Avengers.

During their conflict with The Weeper and Klarion, Access came to learn the truth about his origins. This has caused him a lot of inner conflict, as well as greatly expanded his powers, the full extent of which have yet to be seen.

Axel is your typical teenager, for the most part- likable and idealistic, though he can be impulsive and stubborn at times. Despite his reputation as a "jock" he's smarter than he seems- though not as smart as he thinks he is.

Miss Martian: Access gets along well with most of the other characters. In particular, Miss Martian and him get along like siblings.

Nabu: Access swore to the sorcerer Nabu that he would find him a host body in exchange for his help against Klarion, a promise he has yet to fulfill.

The Weeper: Access hates The Weeper, both for being a serial killer and for exposing him to his true nature.

Alien Detection: Access can sense anything that "does not belong" on Earth that is near him (within several city blocks.) This includes things like aliens, magic and time travelers. He can sense their presence and approximate location (but cannot tell what they are.)

Teleportation: Access can transport himself (and others) into a dimension he calls the "Access Point". From here, he can re-enter the universe at any point he can envision, regardless of distance. The strange dimension causes mild disorientation on those experiencing it the first few times (by now both Access and most of the Justice Avengers are immune to this effect.) Access needs to have a clear mental image of where he's going, he cannot just jump to locations he's never seen (he watches a lot of international TV to help with this.) He can also teleport people or objects without going along himself (though he has problems teleporting magical objects for some reason.) He can also bring objects to him as long as he knows where they are (usually these are limited to his belongings in his apartment.) He can teleport up to a dozen people at a time.

In one occasion, Access was able to merge two people (his girlfriends Ming and Caitlin) into a single person by accident. It is possible he might learn to this consciously in the future.

Recently, Access discovered his powers include time travel! However he is very unsure about using this ability.

Football Skills: Good for fighting, though not extraordinarily so.

Trivia knowledge: From watching a lot of TV, mostly about places on Earth and space.

Access has the strength level of a young man his age who exercised a lot as part of football training. So he's about as strong as a (slightly older) average adult male.

A crowbar Miss Martian gave him. He keeps it in his apartment and summons it when needed.

Retrieved from "https://justice-avengers-rp.fandom.com/wiki/Access?oldid=4552"
Community content is available under CC-BY-SA unless otherwise noted.