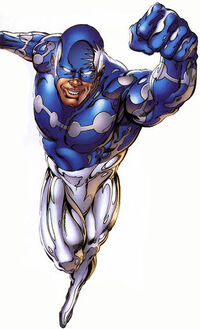 Base Of Operations
Varies
Status

Origin
The Uni-Power grants power and the identity of Captain Universe to chosen few.

Well, unlike the others here, I have touched the Cosmos, however briefly, and I know it's light, not darkness, that truly rules.

Long ago, an alien race was being persecuted by a race of demons. Unable to find a place to hide, they decided to leave the universe altogether and moved into the Microverse. Using an artifact called The Sword in the Star, they created a barrier between the universes. But this wall had to be propped on both sides. With the Sword, they created two semi sentient forces for this purpose: The Enigma Force on their side, and the Uni-Power on ours.

The Uni-Power has no permanent host: rather it chooses one to perform a mission and grants it its powers and knowledge of the mission, then withdraws them after they are finished (or if they abuse the power.)

When the criminal Harkustath arrived at Zur-En-Arrh, the Uni-Power chose 69 year old Afuio as its host. The retired architect had been wishing for one last adventure, and he quickly put his powers to use by defending the city from the Silver Surfer and Harkustath.

Afuio is a stern, concentrated man whose values cannot be bent by the corruption of the darkness.

Energy Blasts: The wielder can concentrate the Uni-Power in a mighty blast.

Molecular Control: The wielder can manipulate non-biological objects and beings on a molecular level.

Captain Universe's power level equals that of Earth's Superman, but it may increase or decrease depending on the wielder.

Retrieved from "https://justice-avengers-rp.fandom.com/wiki/Captain_Universe?oldid=4553"
Community content is available under CC-BY-SA unless otherwise noted.