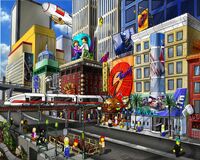 This world differs from other Earths by the fact that everything in it is made out of LEGO bricks, from the people, to the building, to the cat down the street. Even the Moon is made out of bricks!

Retrieved from "https://justice-avengers-rp.fandom.com/wiki/Earth-L62?oldid=4503"
Community content is available under CC-BY-SA unless otherwise noted.