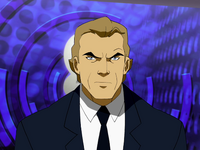 Origin
Originally a powerless conservative news reporter, Godfrey's tirades against the superheroes of New York attracted the attention of Dahkseid, who turned him into one of his Elite.

These so-called superheroes are nothing more than playboys trying to compensate for their horrible childhoods or teenagers putting entire streets in a coma like it's all a big joke!

G. Gordon Godfrey was born to Maria and Robert Godfrey in 1963, after the JFK assassination prompted the couple to move from Dallas to New York. After the event, the couple became extremely conservative, but only in regards to subjects like the government or the economy- when it came to mutants, neither of them had much of an opinion with it. Godfrey, however, co-existed with mutants on a daily basis, as he was forced to visit a school on a neighborhood that would eventually become part of District X. Enraged at seeing these mutants use their abilities to get ahead in life, Godfrey vowed to show the truth to the world, eventually working towards studies at the University of Mississippi, where he graduated with flying colors. Godfrey went on to work on various news networks, eventually landing a job at GBS as a field reporter.

Godfrey struck gold when, during a coverage of the hunt for the mutate known as She-Bat, he took some time to go on a rant against mutants. Whilst the online community were quick to point out Godfrey's mistake, network chief Morgan Edge noticed how much interest on his network that tirade had sparked. Godfrey quickly obtained higher and higher positions on the network, going from field reporter, to anchor, and finally to the host of his own show, The G. Gordon Godfrey Show. At the same time, Godfrey caught the eye of Edge's true boss, Dahkseid, who offered a place for Godfrey in his ranks. The pundit accepted the proposal, and now he serves a far higher purpose: to open the way for his lord Dahkseid.

Godfrey eventually got an interview with Tony Stark by contacting Pepper Potts. Before the interview, having heard of the pundit's opinion of superheroes, Blade decided to contract some thugs to do an assassination attempt on him, with the plan being to have Blade interrupt the attempt.

Godfrey is an outspoken man, with his own opinions on matters, notably in his rants against aliens. He doesn't trust the Justice Avengers at all and relies on eloquence to sow that distrust in his audience.He is notably observant, and to get his points across he will talk in colorful metaphors to help his audience understand his point of view. However, his anger can lead him to moments of weakness, where he stoops to the lowest possible level and directly attacks one of the heroes.

Limited Mind-Control Not much is known about what powers Godfrey got from joining Dahkseid's ranks, but one thing that is certain is that Godfrey now has a form of limited mind control over his viewers, his words enchanting and entrancing them to do his bidding.

Godfrey is not a fighter, but some of the abilities given to him after he joined Dahkseid's ranks include slightly enhanced strength.

His short temper, which can be used against him.

Retrieved from "https://justice-avengers-rp.fandom.com/wiki/G._Gordon_Godfrey?oldid=4527"
Community content is available under CC-BY-SA unless otherwise noted.