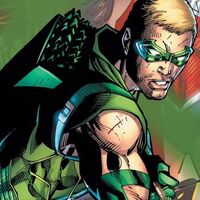 Base Of Operations
Star City
Status

Origin
A playboy millionaire, Oliver's life changed when he found himself stuck on an island, where he learned to survive with a bow and arrow, skills he used when he returned and adopted the moniker of the Green Arrow.

As a young child Oliver idolized his hero Robin Hood and was said to be a natural archer, frequently practising with his bow and arrows. He was mildly traumatized the first time he accidentally killed an animal, but when his mother and father were mauled by lions in a tragic safari accident his hesitation to shoot cost them their lives. Afterwards he was raised by his uncle and eventually inherited the family fortune and business (Queen Consolidated). Queen grew into a rich, thrill-seeking, and drunken playboy with no real sense of responsibility or direction in his life.

Everything changed when he fell off his boat in the middle of the ocean and washed ashore on the remote isolated Starfish Island, clutching a bow – a memento from a Robin Hood movie – which he had used to keep himself afloat, where he was completely stranded. During this time spent without food or shelter Queen developed his skills as a hunter to survive and gained mastery over his bow. Having previously taken everything in his life for granted, this experience taught him self-reliance and made him into a man. His second test of new character was the discovery of drug smugglers on the island run by the ruthless international crime lord China White. Using his new skills, he attacked and destroyed their heroin operation, then delivered them to the authorities before returning home.

Realizing that he had found his destiny, he chose to use his abilities and resources as a crime-fighter. With a nickname coined by the press, he made it his mission to protect Star City, with the help of the hacker Felicity Smoak and his security chief John Diggle.

Oliver travelled to New York after the X-Mansion was attacked by the Sentinels, with the offer to pay for the cost of reconstructing and upgrading the mansion, with the promise that the Academy would send their brightest minds in internship programs on Queen Consolidated.

Oliver Queen has a very dynamic personality. His passion and intensity make him strong, although he has always had difficulty finding direction in life. Born into wealth, he didn't need to work for most of what he had and was raised with very little responsibility. His experience on Starfish Island taught him self-reliance and showed him there was more to existence, giving him an outlet. Whilst some see him as slightly egotistical, they cannot deny that Queen does his best for the city and for others.

Archery: He claims to be able to shoot 29 arrows per minute. He has a wide-variety of trick arrows, ranging from bola arrows to time-bomb arrows to his infamous boxing-glove arrow. In recent years he has used these arrows sparingly, preferring the time-tested simple arrow.

Martial Arts: He is proficient in several forms of hand-to-hand combat including Judo, Kickboxing and Karate.

Others: Oliver also has perfected the arts of acrobatics, hunting and swordsmanship.

Oliver is still a mortal man even after years of training.

Community content is available under CC-BY-SA unless otherwise noted.