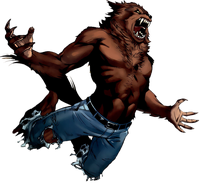 Base Of Operations
None
Status

Origin
He inherited a curse from a long-dead ancestor bitten by a werewolf and reawakened by his father's attempts at dark magic and since tamed his wolf form, now using his curse for justice.

My father, a European scholar and aristocrat -- and more, a warlock and werewolf -- who, now dead, had left me another inheritance as well -- the curse of a werewolf born!

A long time ago Gregori Russoff was bitten by a werewolf and although the curse was passed down to his descendants, as his children were already born when he was bitten it was dormant. A long time later Gregory Russoff, a Transylvanian baron, attempted to use the power of the Darkhold, a book of powerful but evil magic. This reactivated the curse in Gregory and his two children, Jacob and Lissa. While the children did not start transforming until they were older, Gregory became a werewolf and sent his family away to keep them safe before he was eventually killed by an angry mob.

Jacob and his sister were raised by his mother and step-father, the family taking the step-father's name of Russel in Los Angeles. While his childhood had unpleasant events within it and he was always aware that his step-father was not his actual father, his childhood was overall fairly happy. Eventually the children grew up and when they became eighteen, started turning into werewolves three nights a month around a full moon. The beast was savage but as Jacob fought to control it, he eventually brought the curse under his control. While Lissa had her curse removed by a sorcerer, Jacob gained the ability to control his wolf form and transform at will, changing back to his previous name when he finally accepted the beast within him, experiencing dark parts of the world as he tried to become a hero but ultimately emerging as a champion of the supernatural and defender of the innocent.

Jacob has recently accidentally come across a small group of heroes and assisted in taking down the dark elf invasion.

Jacob is fundamentally a nice person who cares for all innocents of the world, especially those who are cursed or monstrous and who others might spurn and be prejudiced against. However, he also has a very notable dark side which has built up as a result of past experiences and will use heavy violence whenever necessary. He has a dark and jaded view of the world and sometimes doubts his own ability but overall considers it his duty to protect the innocent and punish the guilty. When it is unleashed, the beast is a wild and feral creature and tends to go to utter extremes with its violence but it has been touched by Jacob's experience and is no simple beast. It doesn't have the complex world view or contemplative thoughts of the man but the beast itself is a force for good, a primal defender of the innocent and hunter of predators.

Superhuman Strength: The werewolf has considerably heightened strength, being able to lift heavy objects and deal significant damage with his bare hands but he is not as strong as those who are normally noted for their strength. This also allows for him to jump great heights..

Superhuman Stamina: The werewolf can easily act at peak capacity for several hours and takes less time to recover from fatigue.

Agility and Reflexes: The agility and reflexes of the werewolf are also notably stronger, being essentially double the levels of a human athlete.

Superhuman Speed: While his speed is not incredibly significant, the werewolf is far faster than any normal human.

Superhuman Durability: The werewolf is capable of withstanding significant damage, including low caliber bullets, although he is far from invincible and still feels pain.

Healing Factor: The werewolf has healing capacity much greater than a human's, healing moderate injuries within a week and even major injuries eventually. This is partially passed on to Jacob's human form as injuries suffered as a man will be healed somewhat if he stays as the wolf for long enough and injuries from one form do not transfer to the other.

Acute Senses: Alike a wolf, the werewolf has acute sight, smell and hearing. He can remember, detect and track scents and can also detect heat signatures.

Claws and Teeth: His claws and teeth are much sharper than those of most wolves, being able to cause damage to flesh, fabric, wood, bricks and even some metals.

An injury inflicted by silver will be more severe.

Retrieved from "https://justice-avengers-rp.fandom.com/wiki/Jacob_Russoff?oldid=4532"
Community content is available under CC-BY-SA unless otherwise noted.