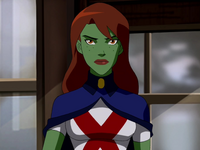 Origin
A martian, taken by her uncle to see her favorite planet, Earth, and its heroes.

M'gann M'orzz was born 48 Earth years ago on the planet Mars. Her mother is a green Martian, the sister of J'onn J'onzz, and her father a white Martian. She has twelve sisters and seventeen brothers, and an extended family of 300 cousins. All of her siblings are Green Martians, except one brother who is a white Martian. As a White Martian, M'gann suffered rejection from the predominant Green Martians. She grew up watching Earth television, and following Power Girl's, Iron Man's and Rocket Raccoon's adventures, believing news reports were documentaries. She was especially fond of Hello, Megan!, a comedy show that lasted only one season; she was drawn to the main character, Megan Wheeler, because of the similarity of their names, and because all her problems were solved in 22 minutes.

Not much is known about what made M'gann run away from home, but one day, she stowed away on Martian Manhunter's ship, disguising herself as a Green Martian. M'gann begged, and eventually, J'onn relented, taking her to New York City, where her heroes lived.

Her first encounter on New York City was with Power Girl, one of her favorite heroes. Although it took a while for Power Girl to be convinced that Megan was from Mars, the two started their friendship after a breakfast on a local diner. Afterwards, Megan helped with the Morlocks, which is when she met Rogue. After that, she met the rest of the group, including her other two idols, Tony Stark and Rocket Raccoon. It was during those first days with the group that she also met one of her best friends, Raven.

When Stark Mansion was attacked by Tweedle Dee and Tweedle Dum, Megan fought back by attacking the two with her telepathy. But she went over the line, and ended up sending the two into a coma. Scared of what she had done, she ran away, but Power Girl and Rogue managed to talk her into coming back. That was the first of many of Megan's troubles with her psychic powers, which her uncle J'onn later revealed was almost as twice as big as his. After rescuing a young Man-Bat from the hands of She-Bat who was hidden in a cave in New Jersey, Megan continued to fight crime alongside the heroes, officially joining the Justice Avengers East.

During the Weeper's attack on New York, his aura of fear affected Megan the most, causing her to see her friends rejecting her for who she truly was, and making her feel like the world was rejecting her. Losing control of her psychic powers, she did a mad dash for the AJAX Industries factory, knocking people into comas along the way. As the Weeper's power over her grew stronger, she lost even more control over her powers, destroying the entire factory and reverting back to her original form. Power Girl eventually calmed her down by heading into her mind and defeating the fear that plagued the Martian's mind, also finding out about her secret. Once everything was over, the people regained their conciousness, but now were in fear of the alien.

With the help of Tony Stark, Megan set up a press conference to apologize for her actions, after some much-needed help from her friends. After the press conference was crashed by both G. Gordon Godfrey and Kearson DeWitt, another member of the "Disgruntled Ex-Stark Tech Employee" club. During the fight that ensued, Megan was knocked out, and in order to survive, Rogue had to leech off her powers for a moment, also finding out about her secret (and Power Girl's secret too). After the two bonded over said secret, they helped Jack Ryder deal with the crowds that had been riled up by the episode of his talk show featuring anti-mutants. During the taping of the episode, Parasite attacked, and when Tony found himself under the Weeper's effect, Megan helped him get back to reality.

It was time to deal with the Weeper once and for all. Together with Access, Raven and Teekl, Megan went after the Weeper, and after another battle, defeated him. The group returned to Stark Mansion for a much needed party, where Megan decided that she would move to the X-Academy with Rogue in order to learn how to control her powers.

Picking up the pieces

The next day, Klarion activated his spell, switching the ages of all the heroes and villains of New York. Now an adult, Megan, with the help of the other older heroes, helped coordinate the fight against Klarion, who was eventaully defeated by Power Girl. However, after all the trouble she had went through with the Weeper, combined with the emotions that had re-appeared due to being turned into a teenager by Klarion, Power Girl found herself at a particularly though time of her life. She proposed the idea of a break to Megan, and the girl initially rejected the idea, dreading the thought of a Power Girl-less New York, but after seeing her friend's state, agreed to it, asking for her to wait until she moved out to the Academy.

The following week, Megan helped on the fight against the Music Meister and, on a more personal level, helped Access with his girlfriend troubles, singing about how he had become a sort of older brother to her, and how she wanted to learn what love is from him, inspiring him to fix the situation with Caitlin and Ming.

A few days later, the group received a message from the Watcher, who requested their help in assuring the safety of what he called "the most important hero of all time". Afraid of being overshadowed by this new hero, Megan went with part of the group to Smallville, where she helped Kal-El, learning more about him and taking a liking to the Kryptonian. Once they found the Hulk, Megan calmed him down, befriending the green ball of rage. When Kal-El was captured and placed in a contraption which allowed the Ultra-Humanite to suck his powers, Megan put herself in danger by attempting to control the old man's mind, which left her with a few horrible images on her mind. But with the help of Rogue, Rocket Raccoon, Blue Beetle, Blade and the Hulk, they defeated the Ultra-Humanite and saved Kal-El. Megan even suggested that the Hulk be taken to the Cave where they had rescued that young Man-Bat from She-Bat as the group returned to New York.

The following day, Megan, together with Rogue, appeared at the X-Mansion to help rebuild it, after the events of the Sentinel attack.

Miss Martian is a bubbly, exceptionally sweet, polite, and caring, although occasionally shy, young Martian girl, who longs to fit in on Earth. However, being from Mars and having never really interacted with humans before, she is frequently unfamiliar with Earth customs. She feels especially uncomfortable with her telepathy, as on Mars, it is the prime form of communication, and due to the problems that often occur when she uses it. She is also quite inexperienced, and eager to please.

Psychic Powers: Megan possesses the ability to perform telepathy and telekinesis, but due to her inexperience, these powers can often take the best of her and end up harming her or her friends.

Television knowledge: It may not sound useful, but Megan knows a lot about television and it's tropes.

Being a Martian, Megan's strength is higher than a normal human, but lower than the heavy hitters of New York, like Power Girl.

Megan's extremely weak to heat, especially in the form of fire.

Retrieved from "https://justice-avengers-rp.fandom.com/wiki/Miss_Martian?oldid=4523"
Community content is available under CC-BY-SA unless otherwise noted.