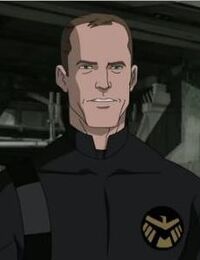 Do you understand the power you have here? Not the power to punch someone in the face and send them flying away, but the power to inspire people to be more than what they are. And that is not something a little group does, Mr. Stark.

Phillip Coulson was born to Robert and Julie Coulson, with the former being a war veteran and a fan of Captain America. Phillip didn't initially share his father's views, actually going as far as mocking them, but after 9/11, he understood what heroes meant not only to his father, but to the population in general. He later joined SHIELD to bring forward some change to the world.

Coulson was assigned by Nick Fury to contact the team that had been formed by the superheroes of New York, with an offer: SHIELD would finance the team's operations, and in return, the team would occasionally do missions for them. Not all of the Justice Avengers accepted his offer, which meant he was sent after more assets to recruit to SHIELD's side. On one day, he found Loki Laufeyson, Moon Knight and Booster Gold, immediately offering them a place in SHIELD after seeing their potential to do good. With this small group (sans Booster Gold), he helped protect the Xavier Academy from a Sentinel attack, going as far as taking one of the Sentinels, Nimrod, to SHIELD headquarters. Later that day, he was sent after a mysterious signal on the New York mall, which turned out to be a memory-less Odin. He helped fight back the Dark Elf Invasion, and offered to help Gold of the Metal Men. Although she rejected his offer and acted as Dawn, a normal human, Coulson found a way to track her, so he could do so in the future.

A charismatic man, Coulson has a way of talking to others, often using all the words he can use to make others see the world the way he sees it. Even in the face of danger, Coulson maintains a calm facade, having a constant smile on his lips. He only abandons the 'cool secret agent' persona when near his friends orwhen it is time to battle. Coulson believes in the system and the morals it uphold, and will not hide his disdain for those who break the rules. He is a nostalgic man and a superfan of Captain America, and will not lose a chance to geek over his favorite superhero.

Retrieved from "https://justice-avengers-rp.fandom.com/wiki/Phil_Coulson?oldid=4442"
Community content is available under CC-BY-SA unless otherwise noted.