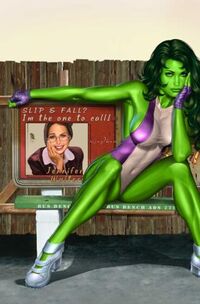 Base Of Operations
Jump City
Status

Origin
Jennifer was shot by mobsters while being visited by her cousin, Bruce Banner, AKA the Incredible Hulk . A blood transfusion from Banner was necessary to save her life, a side effect of the gamma-irradiated blood was that she mutated into She-Hulk.

Jennifer Walters, the meek and mousy cousin of Bruce Banner, was the daughter of Sheriff Morris Walters. Agents of Nicholas Trask, a crime boss who had crossed paths with her father, shot and seriously wounded her on a day when her cousin was in town. Bruce gave her a blood transfusion, as no other donors of her blood type were available; the radioactive blood mutated Jennifer as it had her cousin, transforming her into the She-Hulk.

With the help of her cousin, Jennifer learned how to keep her powers in check, mostly due to a device Bruce created called the Gamma Charger. Since Jennifer obtained her mutation through blood transfusion, her change into She-Hulk isn't as wild and as mindless as her cousin's, which allowed her to run a relatively normal life, as the shrinking violet law student Jennifer Walters on one side and as the crime-fighting She-Hulk on the other.

She went to Harvard, and studied alongside Matt Murdock, eventually obtaining a law degree and opening a practice. In search of new opportunities, she moved to Jump City, bringing She-Hulk alongside her.

On Jump City, Jennifer found her old law school friend, Matt Murdock. The two immediately rekindled their friendship, and Jennifer, with more confidence due to her crime-fighting as She-Hulk, attempted to start a romantic relationship with him. When that backfired, she decided to spend most of the next days as She-Hulk. That was when she met the other heroes of Jump City, including Thor, whom the feisty jade giantess took a liking to. She-Hulk also met Lobo, who tried to hit on her, but ended up getting hit by her. Several times.

Jennifer, still saddened over the premature end of her relationship with Matt, staged a fake kidnapping, in which Matt, looking for Jennifer, would meet She-Hulk. This only lead to her meeting Daredevil, Matt's hero persona. That night's events ended with She-Hulk being caught in the vicinity of the Big Bang, inhaling a small amount of the toxic gas, which knocked her unconscious.

She woke up, as Jennifer, on a hospital bed, besides Betsy Braddock, the secret identity of another one of Jump City's heroes, Psylocke. Betsy helped out Jennifer by offering a friendly person whom she could talk to, especially after she stumbled upon Betsy before running off to the Big Bang. After she left her to recover, Mr. Mxyzptlk showed up, and switched her personalities, turning Jennifer into the confident one, and She-Hulk into the meek one, a gift which she used to fix her relationship trouble with Matt, and the two began dating that very same day.

Of course, not much later, She-Hulk started dating Thor, proving that the two women were almost like separate personalities.

After helping Starfire and the group with their attack on the Gordonians, She-Hulk met many of Jump City's other heroes, especially Black Panther, whom she took an immediate liking to, the idea of purely physical relationships being planted on her mind, as her relationship with Thor went from dating to sleeping together.

She-Hulk participated in the fight against the Band of the Bland, where she met Majestic.

Jennifer Walters is a quiet and smart lawyer, just your average person, ready to do the best she can to help people, especially those with troubles with superheroes and supervillains. She keeps to herself, and relies more on her wits than her brawn.

She-Hulk is the opposite. Whilst Jennifer is quiet and almost meek, She-Hulk is confident, outspoken and feisty, a crime fighter who likes to use both her intelligence and her fists, and who is a flirtatious party girl that really gets around, acting on fantasies Jennifer finds too embarassing to act on.

Gamma mutation: In her She-Hulk form, Jennifer is exponentially stronger and possesses enormous superhuman strength, that potentially makes her, by far, the physically strongest known woman in planet Earth when her emotional state is sufficiently high. She also possesses superhuman speed, agility, stamina, and reflexes. With an extremely durable body, she can withstand extreme temperatures, is immune to all terrestrial diseases, and also possesses an enhanced healing factor.

Lawyer: Jennifer Walters is an accomplished lawyer, having studied at Harvard Law School.

One of the strongest heroes of the JAverse, often put on the heavy-hitters group.

Gamma Charger and Flexible Clothes: These two were equipment created by her cousin, Bruce, in order to help Jennifer in her double life. The Gamma Charger allows her to shfit between She-Hulk and Jennifer at will, whilst the flexible clothes don't get ripped to pieces when she suddenly turns into a giant green lady.

Retrieved from "https://justice-avengers-rp.fandom.com/wiki/She-Hulk?oldid=4538"
Community content is available under CC-BY-SA unless otherwise noted.