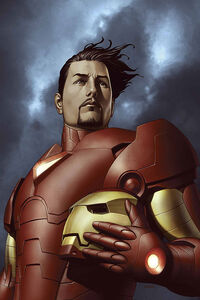 Education
PhDs in Physics and Engineering from MIT
Characteristics

Unusual Features
A miniature arc reactor embedded in the center of his chest.
Origin

Origin
The son of wealthy inventor and business mogul Howard Stark, Tony Stark was captured during a conflict in Afghanistan and, with a piece of shrapnel in his heart, was about to die. Constructing a suit of iron armor that would also help with his recovery, Stark broke out of captivity and journeyed back home to the United States where he built an advanced suit of armor and became Iron Man.

An almost constantly tipsy nutter who manages to practically crap out highly advanced tech in between sessions of poundin' the sauce and feelin' up the ladies.

Tony Stark was born in the early 80's to genius businessman Howard Stark and wife Maria. Precocious and enterprising, Tony was inventing advanced artificial intelligences and building computers and other machines as a young boy, drawing the attention of the general public as a wunderkind.  Tony attended boarding school from the age of 7 until graduating at 14, at which point he entered MIT and was able to graduate five years later with PhDs in the fields of physics and engineering.  Tony's parents were killed in a car accident when he was 17, leaving his last few months of childhood under the guardianship of Obadiah Stane, who ran Stark Industries until Tony graduated and was able to take his place at the head of it, swiftly building the company into a multi-billion dollar weapons and technology research and manufacturing hub.  At some point during this time frame, Tony hired both Pepper Potts and Happy Hogan, as well as built the initial systems for JARVIS, his exceptionally advanced computer AI system.

During a trip overseas to show Army buyers a new style of weapon, Tony's convoy was attacked by a group of strange terrorists, leaving him critically wounded and with shards of metal embedded in his body.  The terrorists brought him to a cave, where fellow prisoner Ho Yinsen was ordered to save his life by any means necessary.  Yinsen achieved this by operating and installing the Arc Reactor, a magnet/battery/pacemaker which would prevent the tiny fragments from tearing into Tony's heart and killing him.  Tony created an upgrade to this reactor within a few days to maximize it's energy output, and with it came the idea to build a new weapon with which to escape from his captors.  The original Iron Man Armor, referred to as the Mark I, was built and used by Tony to successfully fight his way free of the terrorists and find rescue.

Upon returning to New York City, Tony found his entire perspective on the horrors and profitability of war turned upside-down.  He wasted no time in calling together a press conference and immediately announced the restructuring of Stark Industries away from weapons tech and towards new and more peaceful technology, which caused an immediate uproar.  However, Tony took things in stride and threw himself into beginning to invent new and better devices, and opening new divisions in his company to keep as many of his employees as he could.  However, some abandoned the company, refusing to accept the new direction, and Tony wished them his best on their way. Behind the scenes, however, Tony was still having difficulty with the memories of what had happened in Afghanistan, and after seeing a news report about more terrorist activities in the area, took it upon himself as a man who had personally experienced those travesties, to do something about it.  Within a matter of days, Tony's new armor, the Mark II, was constructed and undergoing testing.  However, the steel and titanium design was scrapped quickly, and the Mark III, a gold-titanium alloy, was created instead.  Tony used these armors to make his first trip into the world as a terrorist fighter.

Tony tends to be somewhat immature and flippant most of the time, a rather typical "eccentric genius" who gets away with most of what he does simply by virtue of being rich and famous. He also displays a near childish mentality at times, watching cartoons and choosing to mostly eat fast food and sweets. However, despite the scatter-brained manner in which he treats his daily life, Tony will often reveal this persona to be a bit of a ruse, switching it off to speak in a serious manner more befitting someone of his stature. While fun-loving and with a tendency to get bored, Tony is fully capable of getting serious and behaving in a proper and polite way, but usually chooses not to. However, Tony is also prone to deep depressive episodes, and referrals to himself indicate a level of self-hatred that simmers just barely beneath the surface. Tony also finds it difficult to trust others, not for a lack of faith in them, but for fear of giving them a reason to hate him, which leads to him tending to keep things hidden when perhaps it is not for the best.

[more to be added later]

Retrieved from "https://justice-avengers-rp.fandom.com/wiki/Tony_Stark?oldid=4515"
Community content is available under CC-BY-SA unless otherwise noted.